A new park has officially opened on the former Burtonwood Airbase site in Great Sankey, Warrington.

Airlift Hill will provide a nature haven and peaceful walking route for new homeowners, the business park and the wider community with over 40,000 new trees planted and thousands of metres of hedgerow created.

The park boasts views as far as Manchester and showcases the fascinating history of the site with a restored Pickett-Hamilton Fort at the base of the hill.

Having opened in 1940, RAF Burtonwood was the UK’s largest military airbase during World War II and was responsible for the handling of over 15,000 US aircraft.

Following the Second World War the base supported allied forces in the Berlin Airlift, which saw supplies such as coal and flour sent to the people of Berlin as they were kept under a soviet blockade.

A competition was held to name the new park with the children of Barrow Hall Lane Primary School tasked with the challenge of coming up with suggestions based on the history of the site. Freya Johnson’s suggestion of Airlift Hill was the winner and she was awarded a commemorative plaque so she can remember her achievement in the future. 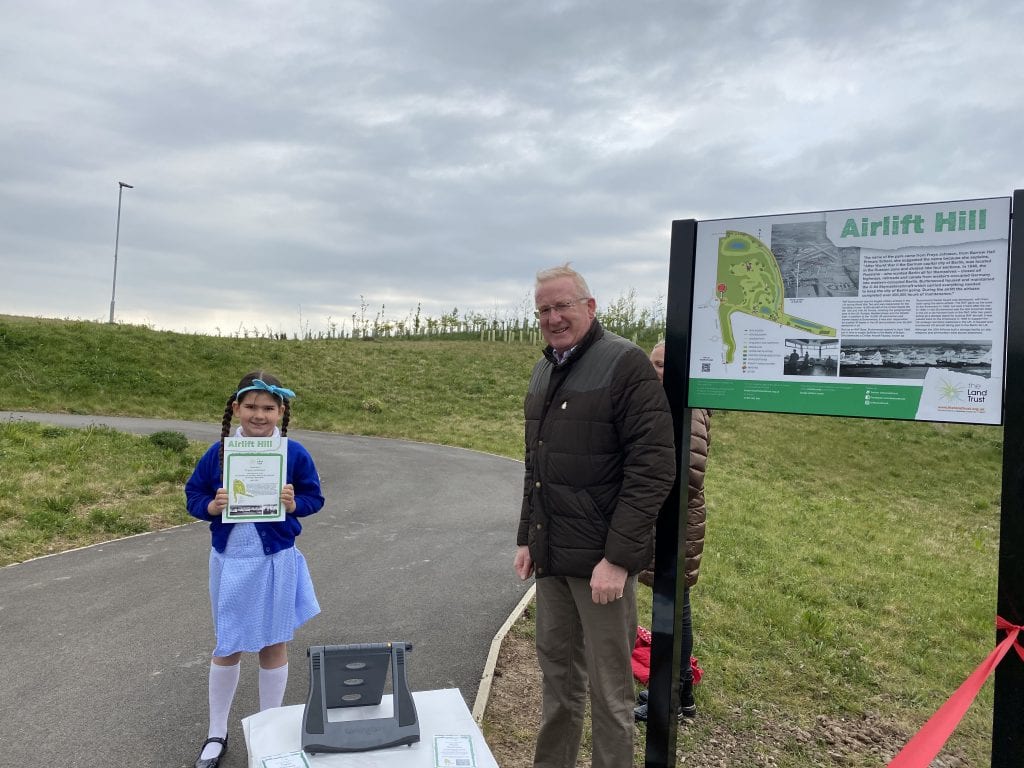 The park is owned and managed by the Land Trust, a national land management charity who manage over 80 green spaces in the UK, including several spots in Warrington.

“I’m so pleased this fantastic resource for the community is now open.

“We look forward to seeing this site develop and mature into a community hub, playing a valuable part in people’s lives as it once did in its former use as an airbase.

“We already know there are a variety of birds and even a family of hares on site, so it’s great to see nature finding its place amongst the nearby housing development and industrial units.”

Barrow Hall Primary School looks onto the park and the children will be using the site for regular outdoor classes. Sisters Pippa and Tegan Walmsley, aged seven and eight-years-old, suggested the name The Landings for the park, which will now be the name for the outdoor classroom area on the hill.

Pippa and Tegan were awarded a certificate to commemorate naming the area.

The park is now open for locals to enjoy nature spotting and the fantastic views over Warrington and up to Manchester from the top of the hill.

For updates on the park, find its page on Facebook @Airlifthillwarrington.