Fairies move in at Countess of Chester Country Park

The mystery surrounding a tiny rainbow painted door which appeared at the bottom of a tree on the Countess of Chester Country Park has been solved following a tweet from the park’s friends group.

The Friends of the Countess Park tweeted to thank whoever built the fairy door and said: ‘the little people from this house will be out #clappingforcarers.’

The park is situated next to the Countess of Chester hospital and provides a  relaxing space for hospital staff to take a break and is a fantastic park for the community to enjoy, particularly at this challenging time.

News of the new addition to the park quickly spread, with others sharing their stories about how they’ve been enjoying their daily walks in the park, and soon the mystery of who created the magical fairy door was revealed.

The McDermott family who are local to the park had spotted the tree on their daily walk and thought it would be perfect with a fairy door, so designed this rainbow door together to brighten up the walks for themselves and for others.

In speaking to Cheshire Live, the family said: ““We always use the Countess Country Park to walk our dog Olly and one evening we took the bridleway walk, and beyond the little bridge, noticed a tree.”

“Our children Amy and Sam are in their late teens now, but still mention the rickety bridge and Billy Goat’s Gruff as we used to talk about the story that when they were young.

“On spotting the hole in the tree beyond the bridge, in keeping with the fairy story theme, we commented that it would look good with a fairy door and it would suit a little rainbow because of the shape.

“We are habitual makers, up-cyclers and crafters anyway, so with a little more time on our hands than usual, we thought it would be a nice feature or distraction for families with younger children, to get them to look and talk whilst on their daily walk. We are really pleased it has been met with a great response of cheering up people on their daily exercise.”

The fairy door seems to be a hit with other park visitors, with some commenting to share their appreciation for this new addition to the park. Twitter user Beth Perritt shared this heart-warming snap. 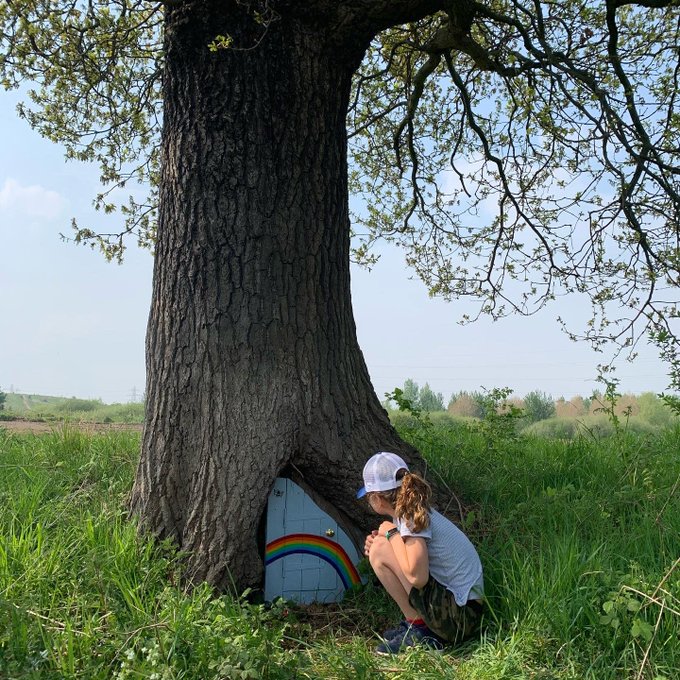 People have been proudly displaying rainbows on windows, pavements and in parks across the UK in support of the NHS during the Covid-19 outbreak, and it is hoped that this addition at the Countess will raise the spirits of many.

The fairy door, which is on a tree close to the tenth poppy on the park’s poppy trail. More information about the trail can be found here.