The dedication of nearly 30 volunteers has provided a fascinating insight into the past of Port Sunlight River Park and the site of the old Bromborough Courthouse.

Over 1,000 volunteer hours have been committed by the dedicated team and have resulted in finds which may date back as far as the 13th century.

The site of the old Bromborough Courthouse, located close to the popular Port Sunlight River Park, has been the subject of a series of archaeological digs in a project led by Big Heritage, the Land Trust and Autism Together. The project was funded by a grant of £450,000 from The National Lottery Heritage Fund, which also funded the newly opened Heritage Centre at Port Sunlight River Park.

The archaeological digs saw three trenches opened up, revealing clear evidence of structures and artefacts which are thought to date back to at least the 14th century.

The structure revealed is a building which was demolished in 1969. Originally the Courthouse, it was eventually divided into two, or possibly three, homes.

Local residents told researchers they remember being inside this building as children, one resident confirming there was a private chapel within the courthouse. This would have been expected in a high status building in the Tudor period, which although converted into a living area still retained its beautiful stained glass windows. 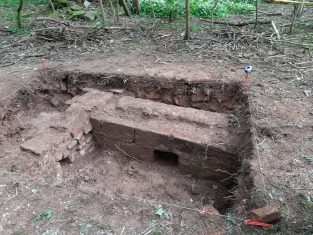 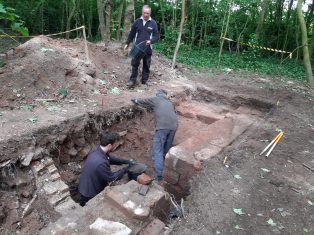 Pottery, clay pipes, a copper belt buckle and stained window glass was also discovered in one of the trenches, indicating that this was once an important site.

Further supporting the theory that the building dates back to the Tudor times, brickwork dating from this period was also recovered although it is still to be definitively dated.

“The findings at the old Courthouse site have provided the community with a fascinating window into the history of Bromborough.

“When the Land Trust took on ownership of this site, along with Port Sunlight River Park, we knew about the more recent industrial history of the area, but these finds potentially take us back hundreds of years.

“None of it would have been possible without the dedication and commitment of the team of volunteers who came together to get involved with the dig, learning new skills as they did so.

“I look forward to seeing more community activities at both the old Courthouse and the River Park in 2020.”

The suggestion that the site was utilised during the pre-historic period is something the team would now like to investigate further in 2020 while pupils from local schools will visit the site in Spring to learn more about the local history and the environment.

I enjoy working at The Land Trust because of the trust that they put in me to be actively involved in projects, and I feel influential in decision making. As a Graduate this provided me with great professional experience across a broad range of disciplines, that'll ultimately be very beneficial for my future career.